What An Exhibition! Year 4 Tate Britain

As part of the national Steve McQueen Year 3 project, Year 4 went along to Tate Britain to see their class portraits as part of the whole exhibition. The children and our parent helpers were thrilled to see their class photo incorporated into the larger exhibition of over 70,000 London school children from 300 schools (from both state and independent sector, mainstream and special needs.) 4 Rosen assembled themselves in the same positions as they had done for the original photograph, with Mrs Jeffrey replacing Mr Faith for a comparison. The visit was well organised by the Tate Britain who encouraged the children to complete specially designed activity packs about other notable pieces of art around the gallery (to include paintings and sculptures.) It was a great day out! 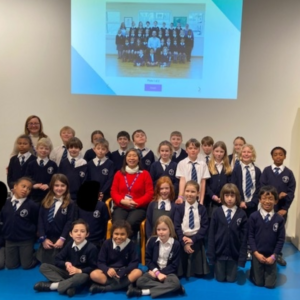