A Second Invite from the Royal Observatory, Greenwich

This Thursday, students from Year 3 travelled to the Royal Observatory Greenwich to give feedback on the proposed redevelopment of the site as part of the ROG’s forthcoming 350th anniversary.
The morning kicked off with a screening of Universe on Your Doorstep in London’s only planetarium where we learnt the origins of the term month (moonth). We then had a private tour of the Time & Longitude Gallery in order to give feedback on plans to redevelop the gallery. The students loved all the screens in the space and thought it needed a map, timeline and further immersive exhibits to bring the fascinating artefacts and historical stories to life.

They then had free time to explore the Observatory and ventured inside the dome where the Great Equatorial Telescope – the largest refracting telescope in the UK – is situated that gave astronomers new views of the Universe over 100 years ago. 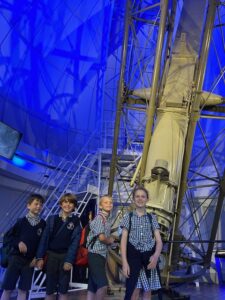 This is the second time the school have been invited to give feedback on the ROG’s plans as the staff have been so impressed with what the students have had to say so watch this space for future opportunities! Many thanks to M’s dad for accompanying us on the trip.
Mrs Wordsworth

E – I liked finding out about the 24 hour clock for sale in the shop and spotting the real clock it was based on in the courtyard.
M – I found out that there are volcanoes on Mars the same size as the British Isles.
J – You could fit over 100 Grand Canyons into the canyons on Mars too.
D – I enjoyed the planetarium show. It felt like you were flying in space! 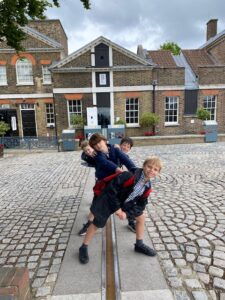