Well we have had a wonderful week learning all about Parliament and democracy. Throughout the week, each class had the chance to vote for two new meals to be included in the school menu and I’m very happy to report that the winners were chicken drumsticks with 170 votes and chicken korma with 85 votes. Of course, we have not just voted on our favourite meals but have been learning about how our country is run. In Year 1, we learned where the Houses of Parliament are; in Year 2 we learned about what happens there in a bit more detail. Year 3 wrote a letter to Boris Johnson about important issues they want the government to change and Year 4 had a debate about issues in society. In Year Five, we thought about all the things we are grateful for in Shepherd’s Bush such as shops, parks, clean streets, jobs, organised roads but then considered how we keep these things in running order and what difficulties the government might come across. This led us on to learning all about being an MP and the duties these people have. After also learning about being an MP, Year 6 were very lucky to have a chat with Danny Kruger and Andy Slaughter who both hold positions as Members of Parliament and so our Year 6’s learned about the ins and outs of the job. Who knows? Perhaps we have inspired a future St. Stephen’s Prime Minister. Only time will tell but, in the meantime, we have chicken drumsticks to enjoy. 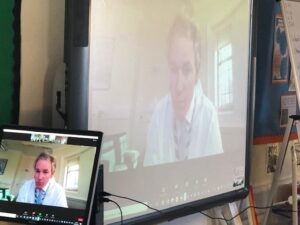