This DT day the children from Early Years all the way up to Year 5 were given the brief to make something delicious and healthy that could be sold at the school’s Christmas Fair. With this clear purpose in mind, the children started the day by planning what exactly they were going to make. The teachers provided the basic recipe, but the children decided on the finer details, such as, any additions or substitutes. The children also had to think about the role of packaging – How could they make their treat stand out from the rest?! Children in every year group worked in groups to meet the challenge and raised money whilst doing so – well done the makers, bakers and creators of St Stephens!

In Year 1, the children followed one of Cookie’s fail-safe healthy, vegan chocolate cake recipes which they turned into delicious cupcakes. The children decided whether they wanted to add cranberries or raisins to their recipe to give it a Christmassy twist! The children worked in small groups cracking eggs, measuring and mixing. They spent the remainder of the day tasting their makings and designing their stand-out label for the fair.

The Year 2s started their DT day by doing ‘mindful’ taste tests of different dried fruits. The children started by looking at the dried fruit before they put it on their tongue and finally slowly chewed and swallowed. The children were encouraged to discuss the flavours and the textures. In their cooking groups they decided which dried fruit they wanted to add to their basic muffin recipe. They then studied some muffin labels and looked briefly at Pop Art which they have studied in art lessons and, feeling inspired, designed their own labels. The muffins they put out to sell at the Christmas fair were delicious AND entirely, unbelievably sugar-free! 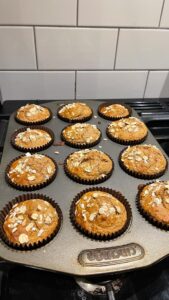 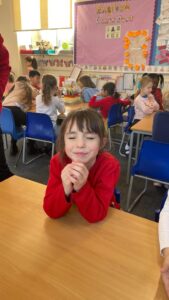 In Year 3, the children learned about longer-lasting energy from slow releasing carbohydrates and used this as the starting point for their ‘alternative’ brownies recipe. The children then substituted milk chocolate for dark chocolate and there they had a healthy and delicious treat. The children worked in groups measuring, mixing and baking. By the end of the day they had a whole new understanding of the different kinds of energy that food can give us and some really delicious and healthy brownies. 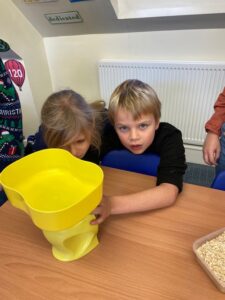 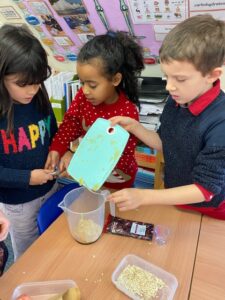 The Year 4s and 5s created seasonal chutney. Their days began by doing some taste testing of a selection of different chutneys to inspire them to think about the flavours for their own. The children in Year 4 were given a selection of seasonal fruit and vegetables to use to make their chutney. The children learned about the importance of sterilising the jar and how the fruit and vegetables were being preserved to be enjoyed months down the line. 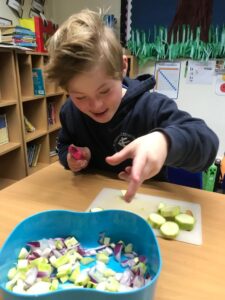 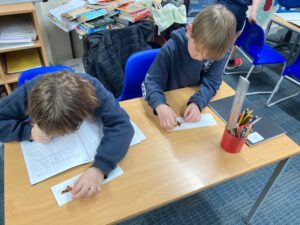 In Year 5, the children were given a wider selection of fruit and vegetables and thought about the role of climate in seasonality. The children were given greater autonomy when it came to making additions to their chutney so each jar had a personal touch. Well done Years 4 and 5 for some very good looking jars of seasonal chutney which lots of people were happy to bag at the fair. 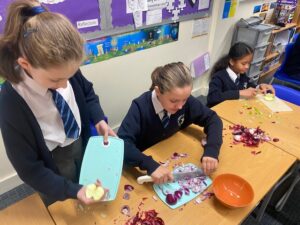 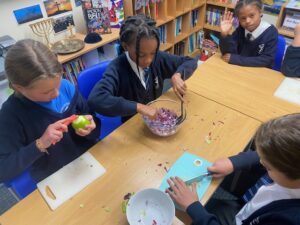 The Year 6s had a slightly different briefing. Instead of selling their products at the Christmas fair, they were making their soup for the local charity Streetlytes. Elena in Year 6 explains why: “Streetlytes is a charity which provides homeless people, people who suffer from food poverty and even lonely people a chance to socialise and be given some warm food and a chance to get to know the community.”

The Year 6 children visited the charity before cooking. Knowing that it would be going to such a good cause, the even more excited to start designing and making their soup knowing that it would go to a great cause. The children were encouraged to taste check their soup and critique it, making any necessary adjustments during the cooking process. Eventually all their hardwork paid off and the team at Streetlytes were hugely grateful for the contribution. 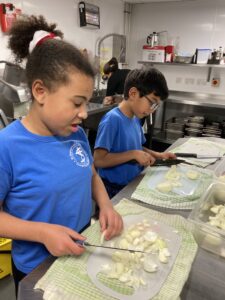 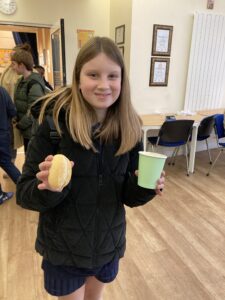 Across all year groups the children tasted what they had made and in some cases what each other had made as part of an evaluation. In the upper years the children were encouraged to share their opinions of each others products as a way of thinking about what they could have done differently or what they might change next time.

Well done to all of the children for an amazing spread at the Christmas fair and thank you to all the parents and carers who supported them.