A Successful Campaign – 20 mph It Is! 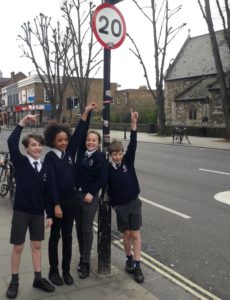 Following their work last year with Urbanwise to develop the School Travel Plan, Y5 Milligan wrote to the council with a request that they believed would benefit, not just our own school community, but also Miles Coverdale parents and pupils as well as the people of the local neighbourhood too.

Realising that a 20mph limit was imposed on traffic on the Uxbridge Road as it reached Shepherds Bush Market station, Y5 Milligan pupils wrote to the councillor responsible to suggest that the lower speed limit was extended by 100 metres, so that vehicles travelling in both directions passed the school had to drive more slowly. After a relatively short wait they were delighted to receive the following letter from Councillor Wesley Harcourt, Hammersmith & Fulham’s Cabinet Member for the Environment.

Re: Extension of 20mph speed limit outside St Stephen’s School

Thank you for your recent letter asking the Council to extend the 20mph speed limit in Uxbridge Road. You have set out very clearly both the dangers and harmful effects of the volume and speed of traffic that goes past your school as well as the reasons why the speed limit should be extended further along the Uxbridge Road.

Safety of pupils at our schools is a matter of the highest priority for the Council and your letter will help me provide our Highways Department with the necessary evidence for the extension of the 20mph speed limit.

I have already spoken to the Senior Highways Officers and asked them to draw up the necessary plans to extend the 20mph speed limit past Coverdale Road. This is now in progress.

We have also been in touch with Transport for London who operate the speed camera that is outside Tesco’s as we would want it moved to a more suitable location once we extend the speed limit.

Once again may I thank you for drawing this matter to my attention.

The great news is that this initiative by the whole of the class has now been implemented and therefore, there should no longer be any traffic speeding passed our school at more than 20mph!