St Stephens cooked up a storm this week for DT Day. Each class took inspiration from their class books and were cooking dishes from across the world and even different historic times!

The children made links to Science and Relationship and Health lessons as they thought about what the body needs to be active and healthy.

Through food the children were able to understand more about the cultures and countries which they have been learning about in class. Food is a reflection of a country’s climate, religions and traditions. Across the school, book characters and civilisations came to life a little more…

Nursery rolled out DT Day across the week and designed their own pizzas, smoothies and sandwiches. For desert they helped to make an apple pie and cupcakes. They have been practised their early knife skills for both cutting and spreading. 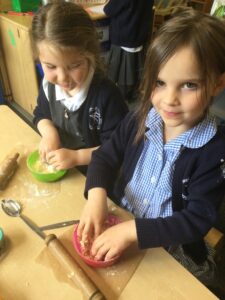 In Reception the children made dinosaur biscuits. The children learnt how to measure ingredients and combine them. They then rolled and cut out their biscuits choosing different cutters. Finally they chose different dinosaur footprints sand skeleton moulds to leave imprints in their biscuits like fossils! 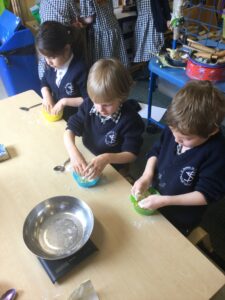 Year 1 made a delicious Peruvian quinoa salad which linked with their Humanities topic on the Amazon rainforest. They learnt about the different foods that grow in Peru including over 2000 types of potato! They chopped up peppers, tomatoes and mangoes, scooped out avocadoes, squeezed limes and mixed them altogether with quinoa. The children said it all: ‘I can’t wait to show my family how to make this at home. It was so yummy!’ and

‘I liked getting my hands dirty!’

They created a colourful, healthy dish and had plenty of opportunity to practise safe chopping skills. 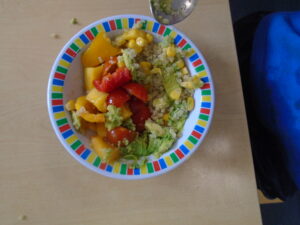 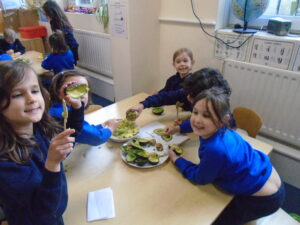 Meanwhile Year 2 were flipping African pancakes inspired by Mama Panya’s Pancakes – their current class book. They started the day by smelling spices and learning about what part of the plant they are from – did you know cinnamon is the bark of a tree?! They then rolled up their sleeves and started crushing spices, cracking and whisking eggs and chopping bananas for a healthy topping! 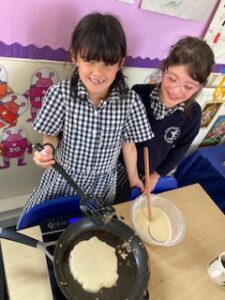 Year 3 Dahl created cucumber sushi (or cucumber maki, to use its correct term!). They covered how to safely and hygienically prepare savoury dishes before peeling, chopping, slicing, grating, mixing, spreading, kneading and baking to make their maki! Year 3 Lear put their baking skills to the test. They were grating and chopping apples, mixing batter and the results were delicious vegan apple and cinnamon cupcakes! 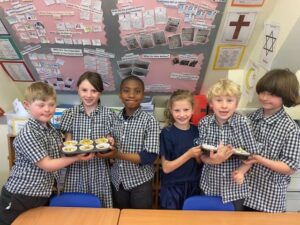 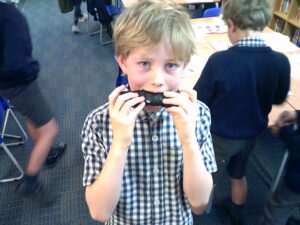 Year 4 spiced things up by making Mexican food as they are learning about the Mayan civilisation which was located in the historic area of Mesoamerica which covers many of the countries around Central North America including Mexico. They made their own tortillas and deseeded, peeled, cut, chopped, grated fruit, vegetables and herbs to make tomato salsa, guacamole and salads. 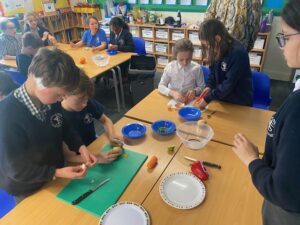 Up in Year 5 the children were wrapping vegetarian samosas and making raita. The children thoroughly enjoyed working together to first decide on and then peel, grate and chop all the vegetables they needed for their samosa mix. The children considered climate and growing conditions in different parts of the world to ensure that they were keeping their samosas as close to tradition as possible. Once cooked, they tackled the technical and tricky business of the wrapping. The children persevered and produced some really quite professional looking samosas! 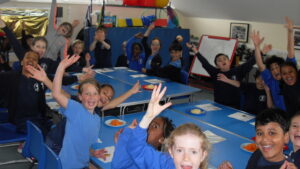 In Year 6 the children have been reading and loving Michael Morpurgo’s Kensuke’s Kingdom. The main event was the fish! They decided how to marinade it and choose their own salad recipe based on online research done earlier in the day. The children were encouraged to think about the seasonality of the ingredients they were choosing. Under the watchful of Head Chef Susie Charrington, they then barbecued their own fish, added their salad and we had a wrap – fish tacos!